Skip to the content
The first question is: are humans endowed with limits– are we endowed with yokes?
The answer is yes, and there is one specific yoke which I wish to highlight, one of a highly fundamental nature. 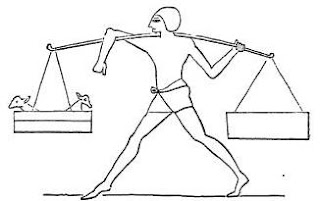 It is horizontality. And it’s getting to be a burden.
Our sense of physical reality is shaped almost across the board by a supremacy of horizontals. We first see it in the horizon, and in our own eyes which are parallel to it, the arc of the sun, we grasp things in proportions, in lengths to widths, we feel it in the water, in the wind, and in the pull of gravity. We sleep on our backs. We study it in ourselves, in homo erectus, as the upright upgrade to our tree-dwelling ancestors. We reflect it in, among the earliest things, our written languages. and the subsequent way we’ve developed (most) written languages…..
This supremacy is so strong, in fact, that our experience of its counterpart, verticality, is fundamentally dependent on it. In essence, the only way we have been able to construct the experience of verticality is by stacking small horizontals one on top of another– a yet-to-perfected craft. In other words, not only are we unable to go purely vertical in the underlying structure of things, but we are also still unable to express the best illusion of it!
The second question is: are we capable of breaking free of these limitations unto which we are born?
We still find inspiration in nature of things achieving a purer verticality, or otherwise undermining the supremacy of horizontals. Can you imagine how hard a plant’s sense of the world must be shaken if its pot falls on its side?
Another contemporary indicator could be found in data. Data, in all of its definitions, skirts these very issues. I am of course most interested in its youngest definition: information [pl] that is used or stored by a computer.
Computers store and access information using binary, which in itself is an astoundingly simple system with astoundingly broad applications. It’s a system using rules as simple as possible in immensely complex iterations: a system that maximizes the difference in size between its rules and its output. I will return to this idea later.
While we may live our lives now with the irreplaceable aid of computers, most of us remain blissfully unaware that all that virtual information we pass through our machines must have a physical counterpart. Every letter we type, every picture we take, every song we stream, every query we search is going to be stored within a chunk of stuff sitting somewhere on planet Earth. And their amount has gotten so immense, that they are now called farms. They are systematic takeovers of space in the service of the production, distribution, and retention of data.
Our interaction & navigation of data’s virtual space is also unique. A website can occupy an almost infinite field, spreading out in all directions. Or, it doesn’t even have to do that– it can simply be a vertically scrolling webpage. Hey! This is how we navigate most of our websites– especially the text-based ones– so much so that the scrolling wheel has become a fixture in mice, as well as in devices like the iPod. This is reminiscent of the first watermills and locomotives– turning circular motion, via a constant tangent point, into a vertical vector.
All of the websites below are designed with vertical scrolling as the primary movement. Some of them don’t even express that movement outright, employing it solely as the underlying structure.
Scroll For Your Health – the benefits of fruit
DSPG – School of Creative Media
Smartphood – An app that tracks your eating habits
Numéro10 – The Agency for Synchronized Commuication

If we are to make significant progress in the building of a purer verticailty, I feel it will be related to this virtual verticality. It isn’t farfetched to foresee a future when the primary inhabitant of Earth will be data. And while it may sound frightening on the one hand, there are architects that could pee their pants in excitement– to design a server farm– a house for information.
Information and its physical traces aren’t subject to the same laws of horizontality that humans are. The primary concerns are electric and mechanical– that is, providing them with electricity, and conditioning the air around them. They are unafraid of heights, do not need stairs to climb or views to take in. The constraints seem so minimal that the design of a server farm tower will likely be completely revolutionary. 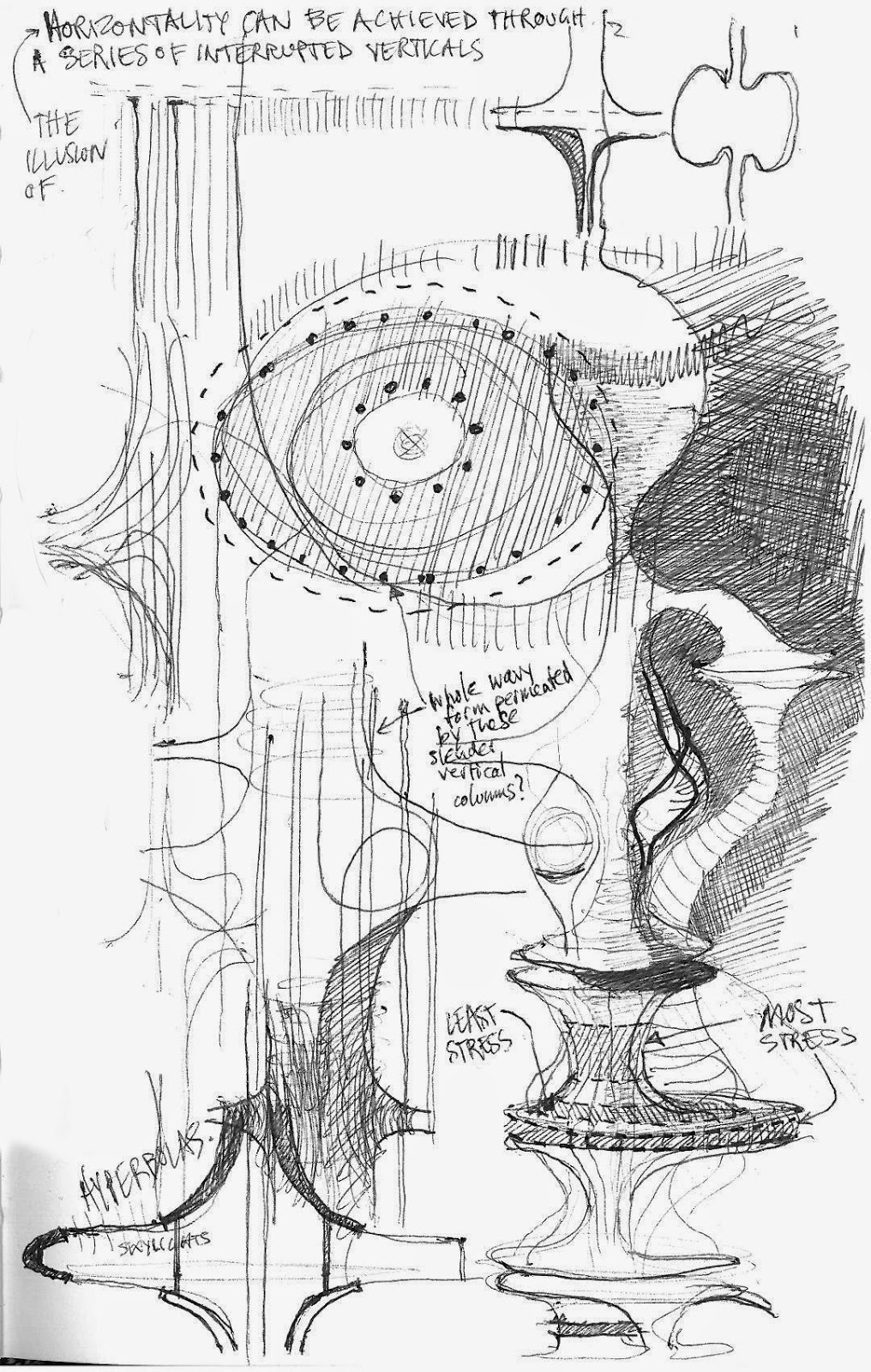 Some of my early sketches arrived at a tower like a beanstalk– a vertical line first and foremost which pauses, takes detours, and incorporates into itself horizontal forms or formulae (formulae as in: mathematical functions, those equations which would change the path of a straight line on a graph) in order to gain the thickness and interiority it needs to contain the volume of servers and wiring. Whatever ‘rooms’ result from these detours might more closely resemble organelles in a cytoplasm, seeds in a hypanthium, or embryos in an endosperm… man, that’s a ton of biology references.
Interesting to note how boring the plan becomes, almost automatically.
One of Anastasiya’s first thesis ideas was the design of a city for angels. It had behind it the same motivation for representing and encountering verticality in a purer sense, not as constrained by ground. Throughout history, the divine has always been understood to move up and down (Gods in a mountain; laws passed down; Lucifer the fallen angel; the depths of Inferno; totems…). Angels do not experience gravity and are more intimately betrothed to a sectional representation of their universe. Imagine a building elevation turned on its side, its elements indicating stratified zones rather than veiling experiences behind it.
Calvino could have been a great architect– aside from the obvious, the real reason is that he has an excellent sense of sections: he builds worlds from the side, with a full view of it from top to bottom. Compared to left/right and front/back, top/bottom has always been a more challenging arrangement to accept since it forces us to acknowledge our mediocre size– the plan holds a supremacy very much related to that of the horizon: it flattens the world, and assumes that the human eye is highest, looking down on it all.
From the above examples, it would appear that we are eternally bound to this condition, and can only fabricate counteracting illusions. That said, I do not wish to belittle this achievement in itself, the underlying principle of which is brilliant.
In our quest to surpass everything earthly (which has become the human mission), we’ve become experts at fabricating illusions. But we don’t do it from scratch. We pick apart the world around us, until it is beyond recognition, then go into sandbox mode. We stack. We zoom in. We reshuffle. We flatten. We break things down in order to rebuild them in our own image. This is the crux of the above examples, simultaneously the reason they are effective representations of verticality, AND why they operate chiefly as fictions.
IF it is truly impossible to separate our existence from the laws of horizontality, then we will settle with the infinite subdivision and stacking/reshuffling of space we’ve been doing thus far. Its scale is expanding and will soon be a monumental micro-division of the very laws of physics, down to the movement of atoms, in order to generate a structurally pure verticality via an indecipherable illusion of it.
But if fiction had been defined from its nascence by illusion, the slow, overarching trend throughout history has been our attempt to bring fiction into existence alongside us, to blend illusion with the real, using the same method of breaking-down. Many of the 20th century’s discoveries and advances have augmented this trend without a shadow of a doubt. What may seem like the construction of a more and more elaborate illusion may turn out to be a fusion between underlying structures and the facades that represent them. The effort to achieve pure verticality– a transformation of horizontality– would spearhead that quantum leap.