This may be half-cooked conjecture, due mostly to its scary simplicity, but it bears notice.
To begin with, the reason our hemisphere is colder during winter months is not because the sun is further away than during summer (in fact, due to the ovular shape of Earth’s orbit around the sun, we may in fact be closer in winter) but because of the average angle of the sun normal to the Earth’s surface. As one may notice, the sun doesn’t rise as high into the winter sky. This is because of the Earth’s angle of declination. We do not spin upright as a freshly released top, but at an angle of close to 23.45 degrees. Here’s the perfect animation we’ve always wanted to see. Due to this angle, we in the Northern Hemisphere are tilting away from the sun from October till April. As we have all accidentally experimented at some point in our lives, blowdryers exponentially decrease in effective heating power the further from perpendicular you tilt them. Maximum heat gain occurs when the direction of radiation waves are perpendicular to the incident surface (same is true, by the way, for magnetism). But before I move on to the next paragraph, I remind you that one of the best strategies for passive (that is, without the need of mechanical distribution systems) solar heating is to locate all glazing and heavy materials such as concrete on the south facade of a building. This side gets the most direct sunlight and heats up the most in the daytime.
Until recently, Earth’s surface has remained primarily horizontal. This is an assumption we base the above evidence on. However, the past 5 years that have witnessed the beginning of an urban majority (the percentage of people living in cities as opposed to rural areas has crossed the 50% mark) bring to some the vision of a planet covered completely with cities. What would that mean? Well, it would mean many things. Many scary things. But singling one of those out: it would mean that a majority of the Earth’s surface would now be vertical. Think of the reason our livers are so bumpy on the inside, why cells have cilia, or why trees grow leaves. It’s all to increase surface area. Now imagine the net surface of the city-blanketed Earth. Most of that surface is going to be vertically oriented. Suddenly, the surfaces incident to the rays of the winter sun are more perpendicular than they were 200 years ago (or, closer to 90 degrees), and those areas are actually getting hotter in winter. That would then mean, of course, the opposite in the summer when the sun is high. Most solar radiation is hitting the surfaces at a very low angle, resulting in very little heat gain. Add to that a building’s thermal mass and you have one screwed up season cycle. 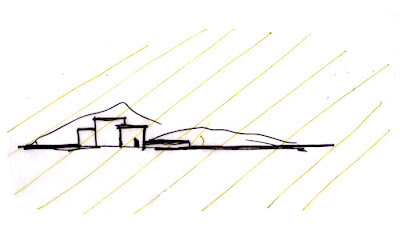 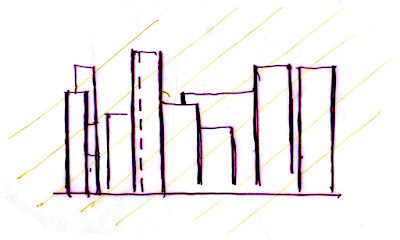 This core concept of the sun’s angle relative to a majority of the surfaces in our microclimate adds spice to the already-proven and maligned urban symptom of heat island effect.
There’s my morbid hypothesis.