Skip to the content
I’m going to describe to you a stereotype in the design world.
Frequently we encounter characters who are obsessed with the building code. While there isn’t anything wrong with adherence to and knowledge of the law as such, this dude has fallen under a spell. Every increase in floor area, every added faucet, every change in lighting layout or hallway width makes this character run to the fabled 4″ code binder. He trumpets the need for rigor when addressing a building’s technical requirements, and laments the complacency of most design professionals toward these rules– what he can’t see is that his dependence on them leads to the same complacency… in disguise. 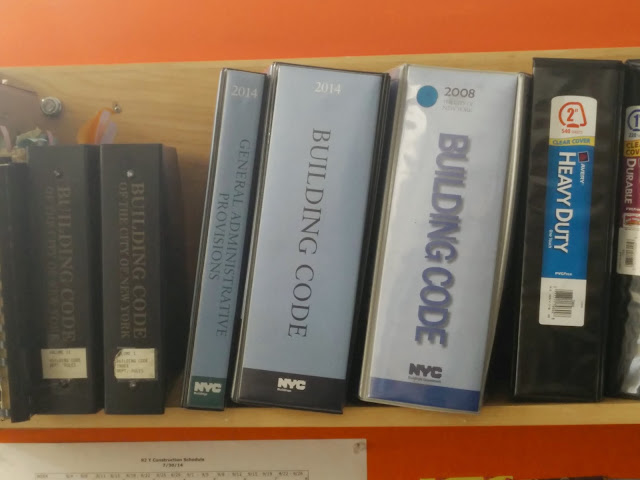 Since they are law, building codes present a curious dilemma. It’s a mistake to think of The Code as a Bible– in my experience it is best treated as something more amorphous, more mutable, more prone to its own errors. I’m not saying that we are free to break the rules, but that there is more interpretation at play than at first evident. Architects and engineers are entrusted with the interpretation of these rules, and are expected to use their interpretation in conjunction with their design brilliance. Design brilliance here plays the part of questioning the rules, and encouraging them to change if the times call for it. Thus, the example set by the aforementioned character sets a bad precedent which has implications for both the design and the use of architecture. Isn’t it strangely incongruous that the hardcore standards imposed on the makers of a building hardly apply at all to its users? It may be a revelation to some, but inhabitants of architecture (i.e. EVERYONE) are given a great deal of freedom in their habitation. It should remain this way.

Inhabitation, in this regard, is defined as a series of decisions and inventions freely taken by an individual as to what to do within a space, and the patterns that result therefrom.

This un-uttered power should be preserved because over time it leads to a bottom-up evolution of architecture— where form follows habitation– and can result in some wonderful (and perhaps lasting) new architectural types. Conversely, sustained lack of this decision-making leads to dependency on codes & standards– complacency,  and in the worst case, fear of change & discomfort. Or: squeamishness. More on squeamishness later, as it bridges the way to our relationship with the natural environment.
Full disclosure: I write this because I feel these qualities continually trying to creep into my own mind. And the problem is that I cannot shut them out completely if I am to become the architect I want to become. A clicking technical mind that has the building code minefield mapped out will better be able to sidestep the pitfalls, and like I mentioned earlier, be able to use the abundance of regulations to push its design to new boundaries. In fact, it may help to avoid the opposite of that dreaded complacency: where a designer who never interacts with the technical aspects of architecture devolves into a sculptor, or graphic designer. This person becomes allergic to laws and regulations, and ends up mostly disappointed when his or her spectacular design is shown to fail the tests. I would argue that we should be more wary of this mindset because most architects come from an artistic background.
We all know both of these kinds of characters. Our job is to play both parts.