Skip to the content
The universe may be much more contorted than we think.
Denis and I were walking out of AP physics, exchanging, bug-eyed, our newest theories on the makeup of the cosmos. That day, the class had done a review of Newtonian physics– the crux of which, it was concluded, lies not in gravity or the three laws, but in momentum. Momentum is really the best way to describe an object in motion, because it takes into account its velocity and its mass, and furthermore, it turns out that the laws of conservation which rule so humbly over classical physics are most concerned with conservation of momentum.
So hang on a minute, Denis says. If momentum gets conserved, the same should be for all other vector quantities, right? A physical quantity which is dimensionally simpler than momentum is work: work is the product of force and distance (ie, when I apply force X on something over distance Y). It is in many senses equivalent to energy. We all know about the conservation of energy– then work must also be preserved, correct? That is: not just the motion and mass of objects, but the forces exerted on them, by them, and among them must also add up to zero. This includes something as basic as displacement. I tell him what I read about Descartes proposing a preservation of motion (in conjunction with the larger theory of conatus, the perpetual tendency for things to preserve and improve themselves) long before momentum became the status quo– in a general sense, there is always the assumption that across all dimensions, the universe must be a zero-sum entity. Denis lifts his textbook. “So let’s start with basics. If I lift this kilogram one meter up, that means that somewhere out there in the universe, one kilogram has just been moved down. If I turn 180 degrees clockwise, somewhere out in the universe, 60 kg has been rotated counterclockwise.”
The universe is on a tightrope. Every twitch in the assumed space/time medium (whatever medium it is– as long as we agree that it’s fluid and continuous) must be compensated elsewhere. We’ve all experimented with this in swivel chairs: putting our feet up, then strategically flailing our arms in one direction so that the chair may move in the other.
We began presuming that the universe is a fluid body of stuff contorting itself endlessly as it aims to balance the displacement of mass inside, as if to maintain its balance or bearings in the grander cosmos it itself is floating in. Like a person on a swivel chair, or floating in water. This, applied to the Second Law of Thermodynamics, gives us quite a different picture than the happily simplified cubicle used to illustrate the entropy of particles moving about within a system, constantly creeping towards equilibrium. 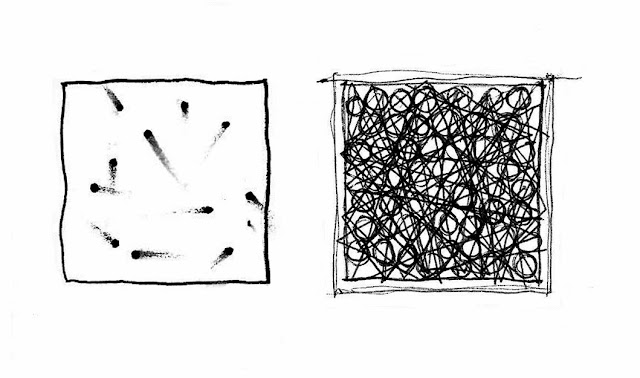 With this relationship established, Denis and I agree that it opens up a new model for investigation– a model that uses relativity to swap frames of reference. Instead of the above illustration, where the universe is a static reference and the particles within it are moving, we might try to imagine the particles staying still, while the body of the system moves about to maintain equilibrium.
An elegant instance of this phenomenon could be what is called Quantum entanglement, and what Japanese physicists recently learned about the laws of conservation (and how they can have exceptions).
http://www.dvice.com/archives/2012/08/uh_oh_entangled.php