Skip to the content
This video will provide the anchor, at which I will tug every once in a while to make sure I am not drifting into the blue.

Creation has always, since its birth, included reference and copying under its umbrella of legitimate bringers of form. Many times in the history of the western world have people rediscovered an interest in the worlds of antiquity (rediscovered) and begun reviving aesthetics therefrom, so much so that it changed the course of the status quo. If artistic progress were a road, would these revivals be considered a U-turn? A backing up? An empty tank of gas? I think they are neither, for these carry a negative connotation. As I said, certainly every work that has been created ever since ever has had some precedent. In a morbid, very Lacanian sense, art, as the “self,” can never not have precedent. As a necessary aside, this finding of a point of no precedent (something more interesting than the Big Bang) is another chain of thoughts. As Nate Harrison mentions late in the recording, even the first fire witnessed by man wasn’t without preexisting conditions. We should be thankful for these conditions, because they are what give us limitations, real or imagined, and which provide that fantastic freedom-within-constraints which is so vital to the human imagination.*

Nate Harrison starts to skirt the surfaces of a crisis around 7:06. He mentions “fetishization” at 7:26. Hooray.
At a meeting today, the question came up of “do we make this building actually mobile, and moveable, or do we make a solid piece of architecture that implies or symbolizes time, and change, at a less perceivable rate, and those who can readily read architecture will see the implicit gesture?” I said, “Think of hundreds of years ago when architects were probably considered idiots for dreaming of moving buildings. They had to come up with inventive ways of indirectly expressing it without being literal.” (We do after all use adjectives like ‘swooping’ ‘soaring’ ‘floating’ and others for old buildings even though they don’t actually. This is the power of the imagination, both as a force that creates these illusions and as a lens which allows for the interpretation of those adjectives in the final product.) The first thing we learn about Queen Hatshepsut’s Temple is its apparent emergence from (and camouflage with) the mountains behind it. Of course it isn’t literally doing that but the evocation is strong. 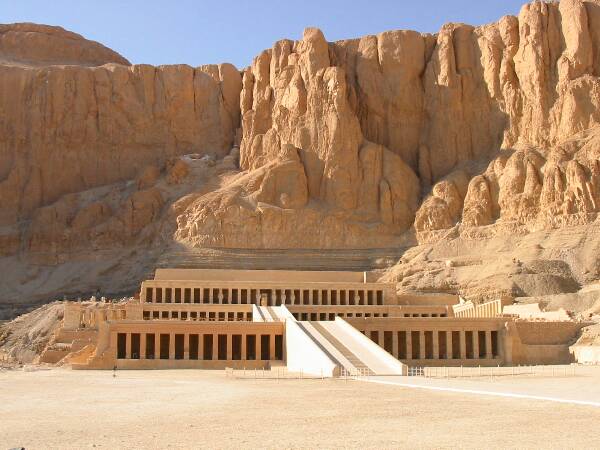 We know for a fact that the Eiffel Tower isn’t about to launch itself into outer space, but it certainly gives that vertical thrust of a feeling, even from a distance. 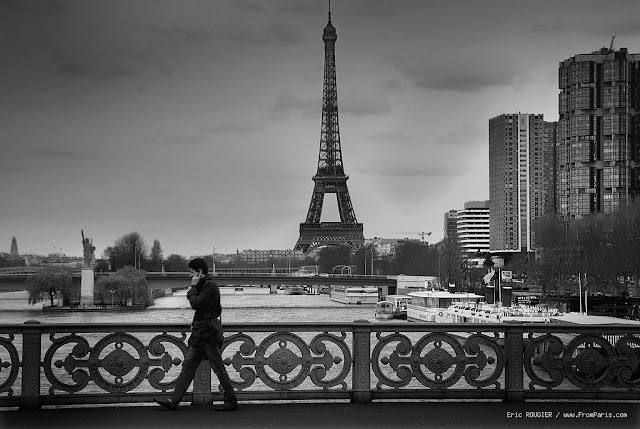 Then, of course, we get the buildings that are too wannabe-moving without actually being moving. When I see Frank Gehry’s buildings, I am starkly disappointed upon realizing that it doesn’t do what it looks like it can, because the illusion is so sought after perfecting that my imagination gets screwed with and upon entering and seeing right angles, familiar materials and construction methods, I am angered that I was led on like a baby getting boo-boohed and gah-gaahed. 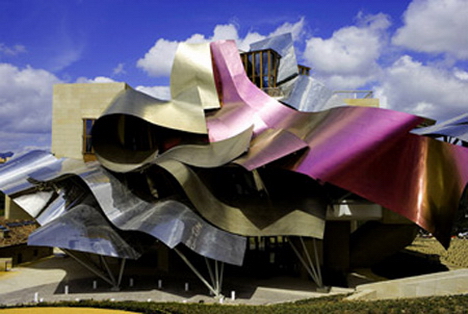 This kind of architecture pays no heed and plays no tag with the human imagination, as architecture should. The spectacle is glorified and the ideas are so juvenile that I am left to wonder whether this architect really considers the wholeness of the building, the relation of inside to outside, of plan to elevation, of assembly to detail.

Architecture is an art that is primarily immobile. Still is. Granted, mobile buildings have been built and the result can be fantastic. But technology is still prohibitively expensive to accommodate such construction and entertaining these ideas of buildings that embody these verbs literally as opposed to evoking them poetically should, for all intents and purposes, not leave the napkin. Near the end of our meeting today, we agreed that there’s a give-and-take– the more moving parts the building has, the less iconic and sculptural it becomes. We are not there yet. We cannot build buildings in our likeness. But that’s one reason why we have this fantastic imagination thing.

A tug at the anchor chain…

The reason I brought up buildings is that it is a direct analogy of the sampler and what it did to music in the 80s. Instead of evoking and referencing styles and songs and other artists indirectly through one’s own creations, you could now reference things directly. Use musical quotation marks. I’m afraid there is something of the human imagination that is left behind when we abandon that purity of creation and shift to direct recycling. It of course traces its roots back to quotation in the textual sense, which may have been the first time (and the easiest) that someone appropriated someone else’s work as their own. But I can think of an earlier example– the first teacher.
Teaching, and handing something down is an artform no matter what the substance, is inherently about copying and repetition. Repetition, in fact, to the utmost extreme. The closer you get to the original, the better, and the more effective the teaching. It is also the struggle to attain the unattainable [an ideology], as with each passing-down there is an iota that changes and is subjected, again, to the onslaught of the imagination, and in the larger sense, to our brain’s tireless thinking of thoughts. In the failure to pass something on verbatim and as an exact duplicate one discovers the glory of the conscious mind. Teaching is the backbone of progress. Imagine the history of human creation compressed into one human life. Imagine you were taught nothing. How would you communicate? When would you learn to use tools? Express your ideas? Teaching and the faculty of passing down information has become all but an instinct (a logical offspring of the instinct driving communication), and it is a fabulous example of the significance of the new extremes homo sapiens must take stands between: between faith to the story and faith to lucid communication.

Nate Harrison sounds to life the anchor and calls this, at 11:10, “the spirit of a pledge to new forms.” And later, “of potentials for new connections and meanings.” I would love to pose some core questions about why we search for meaning. But that’s a sort of second volume. So later.
The large number of questions posed at the end only reflect the unresolved state of the piracy and free speech debate, which SOPA and PIPA have just thrown to front stage. And ends the recording with a pedagogical technique befitting its topic: a quotation. One that rings true and is one of those truths that’s like the darned sun and just won’t go away every time we pray the glare away. Kozinski really hit the nail on the head with his “accretion” comment. And, any judge whose final comments in a high-profile case (contesting Barbie’s status as a sex object….) are “the parties are advised to chill” gets a huge plus in my book of don’t-take-anything-too-seriously-ism.