Skip to the content
EXHIBIT A:
Andrei Tarkovsky
“Learn to love solitude”
EXHIBIT B:
Louis CK
“Why I hate cell phones”
EXHIBIT C:
Gaston Bachelard
“Daydreaming”
“…if I were asked to name the chief benefit of the house, I should say: the house shelters daydreaming, the house protects the dreamer, the house allows one to dream in peace. Thought and experience are not the only things that sanction human values. The values that belong to daydreaming mark humanity in its depths. Daydreaming even has the privilege of autovalorization. It derives direct pleasure from its own being. Therefore, the places in which we have experienced daydreaming reconstitute themselves in a new daydream, and it is because our memories of former dwelling-places are relived as daydreams that these dwelling-places of the past remain in us for all time.” EXHIBIT D:
Jill Bolte Taylor
“Inside a silent mind”
EXHIBIT E:
Rainer Maria Rilke
“As you were when you were a child”

“What is necessary, after all, is only this: solitude, vast inner solitude. To walk inside yourself and meet no one for hours – that is what you must be able to attain. To be solitary as you were when you were a child, when the grownups walked around involved with matters that seemed large and important because they looked so busy and because you didn’t understand a thing about what they were doing.
And when you realize that their activities are shabby, that their vocations are petrified and no longer connected with life, why not then continue to look upon it all as a child would, as if you were looking at something unfamiliar, out of the depths of your own world, from the vastness of your own solitude, which is itself work and status and vocation? Why should you want to give up a child’s wise not-understanding in exchange for defensiveness and scorn, since not understanding is, after all, a way of being alone, whereas defensiveness and scorn are a participation in precisely what, by these means, you want to separate yourself from.”

In the early days of overdubbing, Bill Evans recorded Conversations With Myself by first recording the melodies, then playing those tracks back and playing accompanying lines on top. The iconic image of his silhouette in a dim studio evokes the atmosphere of the record. To be enjoyed on rainy days and in twilit living rooms. 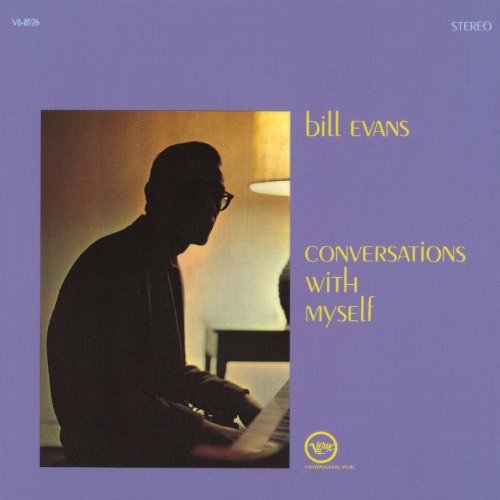 Those who know me know that I give preferential treatment to solitude. These exhibits are only a few of many lines that converge on the concept. Its significance is particularly important today because physical separation from the world is no longer equivalent to mental separation. Since the latter no longer has the sensory pipeline of the former to enter, since turning off the noise of communication which has become our default is so much harder, since that noise is really a trigger for a negative kind of self-reflection which is only a repellent to the shy nature of contemplation– for all of these reasons, it is time we labeled solitude an endangered species and went about restoring it.