The following is an excerpt from an essay I wrote for the Fab City Design Strategies Seminar, at the Institute of Advanced Architecture of Catalonia, Barcelona, in October 2017.

“Nature” and “artifice” are not as separate as we think.

This revelation has probably been in the margins of every major paradigm shift in human history since agriculture. The steam that powered humans’ locomotives had been propelling oceanic currents for eons. As aerodynamic design improves, it returns again and again to ornithological biomimicry. Farms, factories, endless work? Ants have been doing the same a thousand times longer. The polar bear may soon be extinct, yes, but we forget we have been wiping out large mammals since we invaded the Australian continent 45,000 years ago. It is no less relevant today.

All of these examples indicate that modern globalization (something we all consider “outward”) will force a paradigm shift that is more of an inward nature, especially in a time when the thing most urgently needed is a collective narrative about our identity as a species. Where are we going? What are our choices? Are we prepared to take full biological responsibility for these choices? I am fascinated by this new engagement humankind is going to have to have with its “insides.” We cannot afford to simply hide our inner workings (our own bodies, our infrastructure) and live inside clean, white, orthogonal spaces. We will have to get our hands dirty if we want to clean up after ourselves (dystopias like the “real world” of The Matrix or the harsh landscapes of Dune and Mad Max imagine the consequences of choosing not to). Additionally, how will this collective inwardness fit into the principles behind the Third Industrial Revolution (TIR),[3] which envisions the planet as a network of individual makers who are free from dependence on centralized governments or corporations?

I, as an educated city-dweller, can go on with examples and welcome the future with open arms. However, I am not in the majority. How do we, as the people at the TIR frontier, encourage or allow the rest of the world to participate? After all, the decentralized globe is at its most optimal when every human being is included. There is a mental barrier in the average person without a doubt, and it is related to this perceived separation between the nature and machine. Nature = irregular, machine = rational. Nature = dirty, manmade = clean. Nature = harmony, artifice = destruction. Nature = good, humankind = bad. How do we bring these two back out of the opposing ethical corners that we’ve spent centuries painting them into?

Nature is a lot more machine-like than it appears (sometimes even robotic), and our machines and cities behave more like organisms than we imagine. [4] If we have indeed become intrinsically tied to nature, the new paradigm will have to be one of adaptation with, rather than segregation from, nature. Why? Because the latter is an impossible task. Imagine asking everyone who has tasted clean drinking water to go back to semi-filtered, or forcing a Norwegian who has eaten a banana to never touch one again, or telling someone who has flown in an airplane across the Pacific Ocean in 10 hours to take a rowboat from then on. This is the curse of consumption and convenience: returning to less is psychologically a harder task than adapting our energy production systems.

In order to adapt, we have to readjust how we see nature. It is not a single, contained system outside of us. Instead, with our adaptation and integration, there will emerge different modes of nature depending on its relation to human activity. There will be a spectrum of modes, ranging from huge undisturbed regions all the way to tiny home gardens or samples in laboratories. Oostvarderplassen in The Netherlands, as mentioned in The Atlas for the End of the World, is one example of a mode of nature that we haven’t gotten used to yet. On the surface, it appears to be a common wildlife sanctuary, but upon closer inspection, there may be man-made elements like floodwater retention swales, anaerobic waste-to-energy plants, sensors monitoring threatened species, or hiking trails. The entire area may be serving as a corridor for the migration of certain animals. This is a much more nuanced and complex mode of existence between nature and humankind. Furthermore, the potential range of modes will continue to grow as we learn more about how we are affecting the planet (such as the mass decline in bee population[5]) and what we can do about it.

Similarly, there is no reason that cities won’t also start to adapt more complex modes. As The Fab City Network becomes more of a reality, cities will become much more fluid and mutable in their function. For instance, to meet the demands of a shortage of electricity caused by a flood 100km away, a city can temporarily coordinate the flow of electricity to that area, and the average citizen will only experience a miniscule change in the electricity available in their homes (perhaps all of the lights will dim by 5%). In that short time, the city will have transformed itself into a power plant. In this way, categorization will no longer be rigid, and a new activity of humans will be to monitor, model, and manage these transformations.

Cities can then start to evolve on their own in a Darwinian manner. Then it could be possible to classify cities with binomial nomenclature, building a taxonomy, and identifying important historical events where a new branch of city (or a new mode of city) came into existence. Arcticus Industrius? Mediterranea Turistica? Subterranea Ride-Sharea? 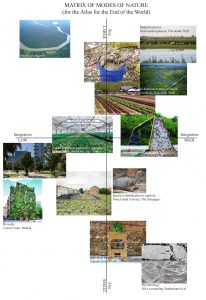 [1] Richard Weller, Atlas for the End of the World, http://atlas-for-the-end-of-the-world.com/.

[4] It is worth observing that nature is also incredibly violent and unforgiving to organisms unfit for survival, almost like neoliberal capitalism is to individuals in the market who are already disadvantaged. I think ecologists and conservationists do not see the whole picture in this regard.