A model lives and dies just like the building it poses for. It’s preceded by dreams and drawings and logistics and a budget and a construction schedule…….. and of course a sharp drop in market value shortly after its completion. After that the name of the game is either find a can of spraypaint and a prominent shelf, or be dismantled for parts.

Learning to build a physical model is also learning how a building gets physically put together, though this is never emphasized. Without realizing it, I’ve been the Architect, Owner, GC, and Building Super of a hundred microcosmic architectural works throughout the past decade.

I was part way through building a light fixture model at half scale when I realized a problem: scoring & folding 1/2″ thick foamcore, while stable, exposes the crackling foam innards inside valleys with gaping shadowlines which at this scale can no longer be ignored. If the thickness of a sheet of museum board telescopes through a site model of a house, no one is expected to ask annoying questions about whether you actually intend for that joint to be part of the design. But I’ll be a dog if they don’t ask it of the 1/2″ vales and glens I’ve now proposed in their light fixture… which is another annoyance: every single thing you present to a client can be assumed to be your “proposal,” and boy does it irk me when they say things like “so, are you proposing the walls to be this color?” “So, are you proposing the walls to be made out of foam?” No, assface, I am not. We got two realities overlapping here in this model, you better get your 3D glasses on or stop asking dumb questions.

Back at my model, in deft anticipation of those questions that would inevitably happen, and already sweating about it, I had a choice about fixing the holes: I could either cover them with a thin layer of paper before painting, or I could fill them with joint compound. Now this may seem like a simple choice, resolved based on what’s around me and how much time I have, but at the root of it is actually an important distinction. If I went with the former, I would be doing something that would never happen in real life, only in the life of this microcosmic architectural work. If I went with the latter, I would be mimicking the actual contractor as he troweled paste into all the cracks when the eventual GFRG emerges from the mold. This, then, is the distinction between “model” and “mockup.” And I reached for the joint compound, because I had to treat this object as closely to its final form as I reasonably could. 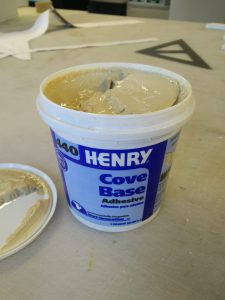 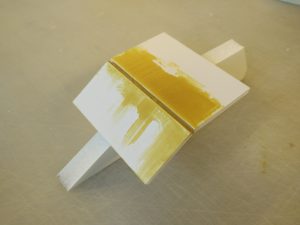 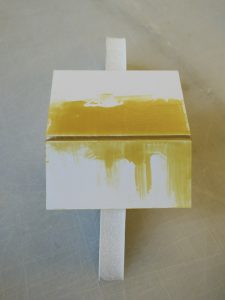 Despite of all this, however, there was a diagram on the back of the container that said not to use it for surface imperfections deeper than 1/8″. 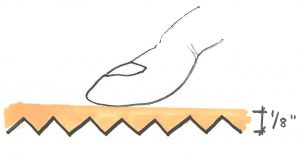