Skip to the content
Two things– a quotation from Andy Warhol (unexpected) and the death of my grandfather– have given me course to re-examine the definition of “event”.
From AW, it comes quite simply: “Dying is the most embarrassing thing that can ever happen to you, because someone’s got to take care of all your details.”

I propose the following definition: Events are what happen unexpectedly when a change occurs. Any change at all. From two bodies moving closer together, to an object’s or system’s rate of change increasing or decreasing, to the perception of something becoming altered, to the value or something appreciating, to the birth of an idea, to the day coming to a close. Imagine a universe where things just happen— that is, change instantaneously. Is such a model possible? Not in this universe. Whenever something changes, there is an event that accompanies it. This is where time is born. As I have suggested in the past, time is what is expelled when change rubs up against an entropic system. I have recently become very fixated on the notion that “events” are actually a residual phenomenon, an aftereffect. It suggests one more (to many, disconcerting) step between us and “reality.” This separation has long been contemplated by many, from Buddhists with enlightenment to CS Peirce with the index. It seems to me that, like a steady tone, events may be happening rapidly enough to give us the illusion of a steady flow of things, a steady change in the properties of space [this is similar to a) a steady musical tone, which is actually an imperceptibly rapid succession of discrete impacts upon the ear drum; and b) film]. Imagine that universe again where things change in an instant, where there are no events. It would be, for the reason above, devoid of time.

This definition is certainly similar to Badiou’s, but I want to keep my distance from politics and mathematics on this one. Badiou mentions four possible realms where a subject can experience an event: politics, science, art, and love. 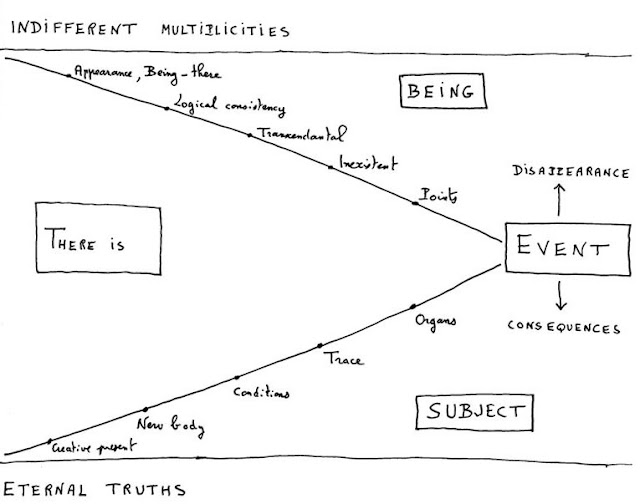 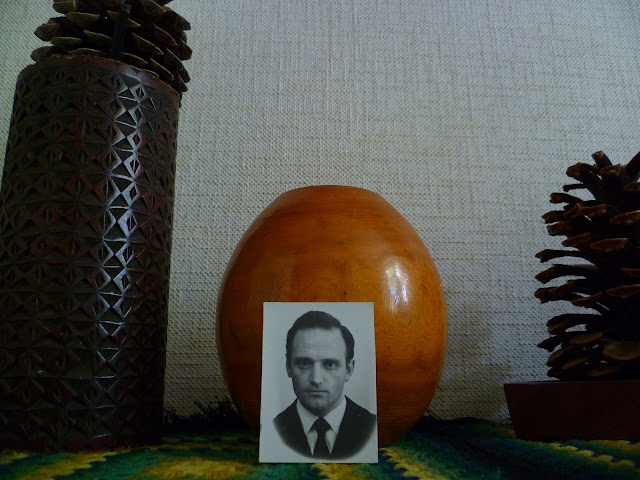 There are all sorts of logistics to handle when a person dies. Their body has to be taken care of– burned, buried, or enshrined. People have to congregate to honor and remember this person. Someone has to arrange this congregation. There are black clothes to wear. There is protocol which crowds time and the physical realm like a bottleneck when all the latter wants to do is move forward a year into the future when all that will be left is the humble if not happy memory of the deceased. And this is just an example: this bottlenecking happens to everyone daily, rapidly, so rapidly that we only perceive it as a steady flow of time, when in fact we are spasmodically stumbling through a fluid, omnipresent space of nonexistent change which is completely obscured by our irregular movements. Even the recluse who lives in the mountains experiences events. They pull you this way and that.

I hate trudging through the bog of the present. It is never-ending. I am tired of that bottleneck. I am living nothing but event after event after event, like flying through a zone of black holes– trying to weave through them, resist getting sucked in, experience the purest flotation in outer space without any gravitational pull, but failing, and ultimately just black-hole-hopping my entire life, never getting to observe space changing from outside (of time).

Death, birth, war, and elections are among the heaviest of these events, the blackest of these holes– but they overwhelmingly exist on a microscopic, microchronic scale. Their influence can be diminished by searching for things that do not change. Perhaps this is how Badiou meditates:

Eternal Truths which address all things omnipresent, and the heterogeneousness of Indifferent Multiplicities must be allowed to coexist, to BE in parallel. When THEY are kept from meeting, I am permitted to flow seamlessly between them– experiencing the universe through both the samenesses and the differences which define and delineate it. And the universe simply is.