Skip to the content
Dr Teresa Belton has released an insipid article which advocates a need for more boredom in our generation. While the article is itself boring and meek, I tend to agree with its closing statement. But it is a state to be approached gingerly. 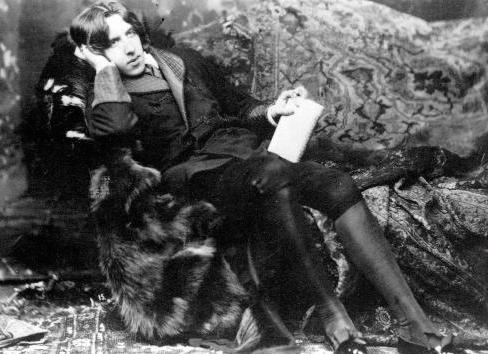 The history of boredomology (thaasophobia is supposedly the fear of boredom, so should it be called thaasology?) is extensive (mostly negative– Kierkegaard, Heidegger, the rest of the existentialists, even Oscar Wilde have remarks on it), but there are two micro-meanings of it which I want to highlight, that perhaps have not entered the greater discussion. They originate differently and have differing implications, and I have a hunch that, placed side by side, their unmatching profiles will reveal the negative space which is to become a new model for boredom as it most affects our generation.
(It looks like our generation’s ultimate legacy will be painted as overprivileged, entitled, and impatient. These characteristics are unfortunately made even more prominent by the primary positive qualities we have: intimate, unsqueamish, and generally well-learned.)
(1)
The first boredom is illustrated in this scene from BBC’s Sherlock (which by the way indicates that this is an intelligent update of the characters, and a high-quality series overall). It is what our generation is finding itself faced with, and perhaps any generation as it enters its 20s: an immeasurable amount of information and opportunity, with apparent lack of an outlet. It is also closely tied to creativity. 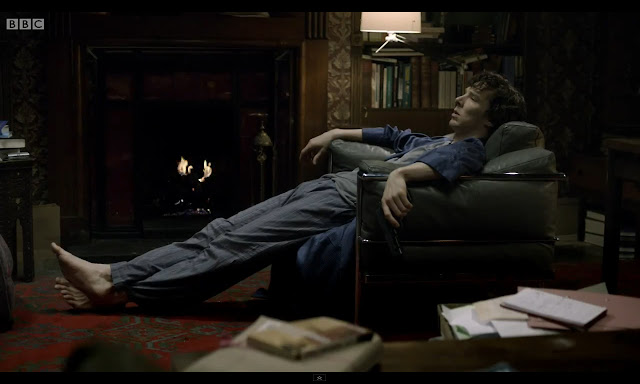 This is the boredom more related to how Charles Dickens first used it in Bleak House in 1852, the one sociologists and neuroscientists are more interested in, the one you’re more likely to hear a segment about on NPR, the one that we can more accurately study, predict, and measure. Great credit must be given to the producers of Sherlock for inserting this condition into the story, and testing the characters with it. Who better than the most intelligent, mentally agile human to serve as an extreme case study for the ramifications of hypo-activity?
Mihaly Csikszentmihalyi’s flow model pinpoints boredom in a similar way. As a matter of fact, it bridges conveniently to my article on potential. Csikszentmihalyi and I would both conclude that the most successful of us realize that the challenge is in fact to discover new challenges, not solve existing ones. This acknowledgement of the plasticity of one’s outside environment is also the reason I would critique the flow model by saying that “boredom” is not the best word to use for that sector, and that “boredom” as I’m trying to define it here can actually infiltrate any of the other sectors, most particularly any three of the High Skills column on the right, where Sherlock Holmes would find himself: be it High Skills/Low Challenge (when solving a domestic Belarusian murder case) or High Skills/High Challenge (when confronting Moriarty)…. Even “flow”.
I don’t presume to be able to illuminate the exact mechanics of creativity, as Jonah Lehrer has (my sympathy to Jonah Lehrer, who has categorically redefined scapegoat) but I would also venture a guess that this kind of boredom is intentionally sought after by twentysomethings. This is the so-called floating phase each of us pursues immediately after graduating college, when it is necessary to withdraw, attenuate the outside din, and find motivation within oneself. It is a kind of socioeconomic meditation, in which one is able to coax one’s desires out through idleness. But hey– doesn’t this now mean that we’re effectively choosing to be bored? It does, which reinforces the notion that boredom is nothing to be allergic to. Inhabited astutely, boredom can act as a catalyst for action to come.
(2)
The second is boredom as described by Alberto Moravia (in his novel Boredom): a detachment from reality. From the prologue:
For many people boredom is the opposite of amusement; and amusement means distraction, forgetfulness. For me, boredom is not the opposite of amusement; I might even go so far as to say that in certain of its aspects it actually resembles amusement inasmuch as it gives rise to distraction and forgetfulness, even if of a very special type. Boredom to me consists of a kind of insufficiency, or inadequacy, or lack of reality….
The feeling of boredom originates for me in a sense of the absurdity of a reality which is insufficient, or anyhow unable, to convince me of its effective existence….
Moravia’s boredom results in the absurdification of the everyday, where a plain glass of water begins to look strange and nonsensical because the viewer has become detached from the whole of its object-ness (the combination of its appearance, its name, its function, etc.)
Typified in the European bourgeoisie till the early 20th century. It stems from a lack of meaningful reconciliation or correlation between one’s ethics, one’s desires, and one’s means. In fact, it arises whenever an individual feels pulled apart by multiple beliefs, all of which are equally possible yet none of which he or she can commit to. Obviously, the wealthier of us are more likely to experience this. 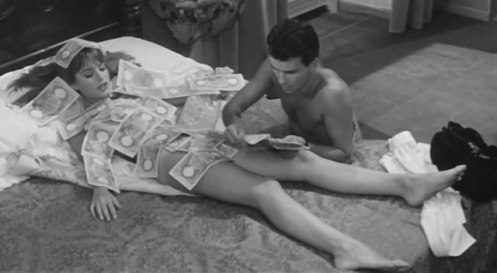 There are nuances in translation as well. The title of Boredom in Italian is La Noia, related to the French ennui. The word noia in Greek is the name for the mind or the intellect (hence paranoia, homonoia). “Annoyance,” another disturbance of the mind, is descended from noia. One can start gathering a sense of the scale of the concept that this form of boredom tries to grasp. With the Greek in mind, it is clear that it lies in the realm of philosophy. There are fewer givens, more unknowns, a state next to which resulting actions will appear much stranger, more fictional. You cannot locate it on a flow model (as #1 above), because it would be inaccurately represented as apathy. It is not necessarily so. Noia is not dependent on skill level as an x (it is probably not an equation at all; there are no x‘s).
Old article from the New York Times gives a nice all-round presentation of the topic, with the loftiness that seems to be protocol for the Book Review. Nonetheless, I am glad Schuessler references Patricia Meyer Spacks’ book Boredom: The Literary History of a State of Mind which may be the most extensive study of boredom in existence. Reviews of the book agree that the act of defining boredom is much trickier than it seems, because of its passive nature.
Many concepts depend on the invention of a word, or a name, for them before they can officially enter the public consciousness, and boredom was the same. It congealed into a concrete concept in 18th century England– very very notably, by the way, at the same time as the birth of the modern novel– out of a generation exposed to radical new advances in technology, the efficiency afforded by which birthed unforeseen free time– and hence, idleness. From that standpoint, objects old and new could easily appear to dissolve and become absurd.
I generally believe that the ability to break something down (an object, a thought…) is a good way to attain better understanding of it. This is probably the way humans have decided to structure learning in general– it is how analysis functions. But from time to time one can plunge into the constituent parts too deeply, and lose the sense of the whole. And it is on that “sense of the whole” that we rely on for daily functioning. Our minds develop a rough picture of something that is good enough for the most part, and make it more detailed if elaboration is needed– if a brain is a computer, this is the equivalent of zipping files, turning down resolution, organizing folders, and preserving RAM.
It is important to be aware of the habits of one’s own boredom, as it comes to everyone differently. My boredom comes to me as a whirlpool, towards which I accelerate constantly in the face of tasks to accomplish, small and large, self-imposed or not. For me, it is something that is best battled with a strict itinerary and in extreme cases just leaving the house for a walk (which counts as doing something, which makes me automatically think of all the things I could instead be doing, which sparks me into action).
I think it is in our best interest to differentiate between times when our boredom is self-imposed and when we are outmatched by it. 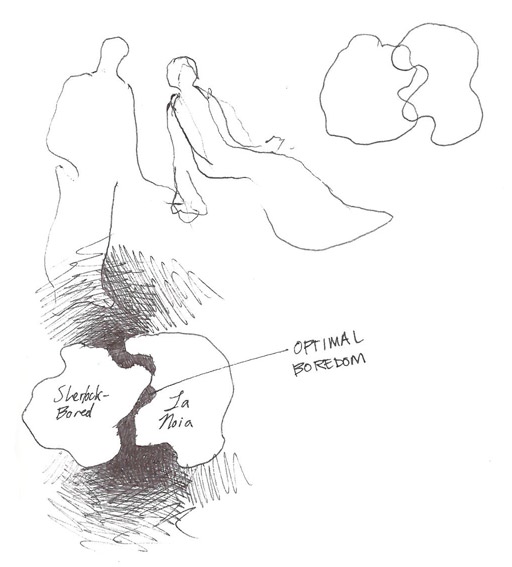